I just read a Facebook post from an old friend of mine about her upcoming 45th wedding anniversary. In the interest of full disclosure, I will mention here that by 'old friend' I mean we dated and she was not one of the legions of women who ever stood me up. What was most notable about the post to me was that many of her friends and acquaintances (who are also friends and acquaintances of mine) mentioned in the comments that they were approaching or had just passed similar milestones. It seems that the people I grew up with have a remarkable capacity for staying married—testament, I believe, to the values and moral sensibilities that are part and parcel of life in small, homogeneous communities.
I myself have only been married for 31 years. The comparative shortfall is due primarily to the fact that it took me a good 15 years longer than the rest of my friends to outgrow the personality defects and social shortcomings that prevented the opposite sex from finding me as fascinating as I thought they should. I'm pretty sure in retrospect that I was an insufferable lout until I learned around age 27 to suppress my ignorance and base inclinations in favor of actually listening to what people had to say.
It's probably a good thing it took me that long to get a clue. In the end I pretty much lucked out in the marriage department—as has been pointed out to me numerous times—and I have my early romantic incompetence to thank for this. In business it's location, location, location, but I think in love it's rather timing, timing, timing . . . and maybe a little hard work.
A friend of mine from my days in public accounting practice used to say, “You marry the person you're dating when you decide it's time to get married.” He was a comedic philosopher, so I don't know if there's any actual merit to his pronouncement. It is probably true for a lot of people.
I'm thinking here of the great mass of unhappy spouses living in misery and regret and not the people I grew up with who seem to be almost universally happy with their choices and their circumstances. It was almost certainly true in my philosopher friend's case. After all he's the one who said it. Shortly after he said it, he got the short end of one of the most acrimonious divorces I've ever witnessed.


I shouldn't have been surprised. He also once said, “The worst pizza in the world delivered to your door is better than the best pizza in the world you have to go out for.” Obviously he hated to go out, and he was willing to suffer and to subject his family to some truly appalling pizza not to go out. That's just the kind of attitude, over time, that gets you into divorce court. In the end I think staying married means doing the best you can by the people you love, even if that means you have to go out for pizza when you'd rather sit at home sipping martinis.
It's the little things that add up, eventually, to 45 years of good living. All the best to those who are willing to try. Like Red Green used to say, “We're all in this together. I'm pulling for you.”
Posted by Jonah Gibson at 2:55 PM 1 comment:

Stood Up! Shot Down!

I've been stood up more than my fair share of times. By that I mean that I'm often left wondering what happened to people with whom I've made a social contract when it comes time for them to deliver according to the intentions they've expressed. It happens almost as frequently as getting interrupted in conversation, about which I have written here. It happened again this week, not in the usual sense of the term 'stood up' of course because I no longer arrange dates with women I meet. My wife frowns on the practice.

This all started when I was in high school more than half a century ago. I arranged a date with a cute little slip of a blond from the neighboring village of St. Henry, Ohio. I had in common with the girl, whose name is long lost to history, that we were both Catholic and we both played saxophone in our respective high-school marching bands. It was my first bona-fide date in the sense that I'd manned up through my own force of will, asked her out in a straightforward manner without the usual teenage machinations and guile, and she had accepted in spite of already knowing what I looked like, an obvious fact to me since I was standing in front of her when she said yes. It was a pretty satisfying experience for me up to this point.

Imagine my surprise then, when I showed up on her doorstep two evenings later only to be informed by her dad that she was “out on a date.” Apparently she had got a better offer in the interim. I was a little cheesed, but I didn't have a lot of experience against which to weigh and evaluate the outcome so I just moved on. One of the great attributes of the teen years is resilience in the face of truly devastating emotional setbacks.

Some time later I met Dee Phister. We worked together at a motor hotel in Columbus, Ohio. She was another blond slip of a thing with a pixie haircut and an engaging sense of humor. I liked her a lot, but I waited a good long time before I asked her out. I wanted to know her well enough, and she me, that there wouldn't be any surprises. I still remember her name because she surprised me . . . twice. The first time (shame on her) I got the news from her dad. Was a pattern emerging? “Out on a date,” he said . . . so yes, I imagine so. The second time (shame on me) the news came from a roommate at her new apartment near the university campus. The explanation was in two parts: “Out on a date,” and “Got back together with her old boyfriend.” Oh well.

About this time I quit asking women out on dates. It didn't seem to me that there was any future in it . . . at least not for me. Whenever a woman agreed to go out with me, she would use the occasion to leverage herself into a better situation with someone else. Or so it seemed. I mean this kind of thing happened a lot. I'm just hitting the high points here.

When I quit asking women out on dates they found new ways to frustrate my romantic sensibilities. I remember one in particular, yet another blond slip of a thing. She ran in some of the same circles as I in Tampa, Florida. I didn't know her so much as know of her. I saw her frequently at our local watering hole, TGI Fridays. I don't remember her name either, but she was originally from Powderville, South Carolina, and she had a voice as thick and sweet as magnolia sap on a late Spring morning. She also had a reputation for being elusive quarry. Many brave young men had attempted to woo her, but she wasn't having any. She never went out with anyone I knew at the time. Then one night she confided in a friend of mine (a friend who eventually became my wife I should point out) that she thought I just might be the balm in her breeze.

Armed with this superior intelligence, I approached her a few days later. All I had to say was, “hello.” She turned away abruptly without so much as a nod to my presence. The balm in her breeze had apparently turned into the bitter in her lemon.
So much for confidence born of secret admissions. So much for the logical progression of time. I'm sure in retrospect that I'm better off things went the way they did, but at the time it was a curious turn of events that left me wondering if there was ever any sense to be made of my universe. I did the only thing I think made any sense in the circumstances. I quit pursuing blonds altogether. I don't know if hair color was the crux of my problem, but I do know that for me at least, brunettes have been much more likely to act as I think they ought. 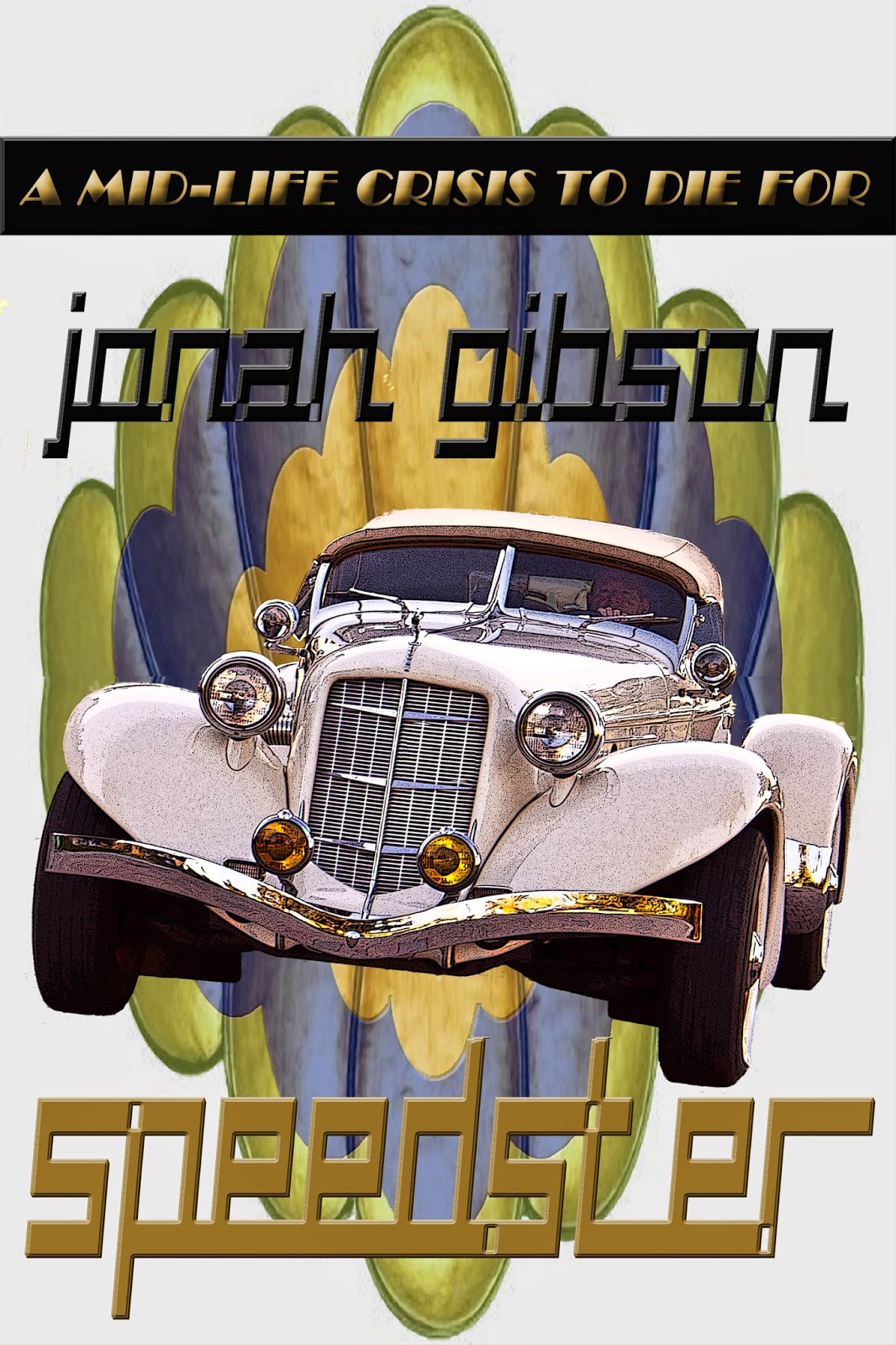 So now, decades later, even though I don't date or hang with women with an eye to romantic involvement, the universe still doesn't make much sense to me. A fellow I don't know contacted a friend of mine on Facebook to ask if she would be interested in doing the artwork for a cover for his new book. She wasn't, but she suggested that he contact me. He did. He friended me on Facebook and sent me a direct message. He said he had just finished the novel and “needed a cover badly.” He described what he was looking for in some detail, and I decided that I could do it. I thought we were on our way to a fine artistic partnership. I was excited about the prospect of starting a portfolio of book covers and marketing myself as a cover artist/designer, something I have thought that I might be good at. (I offer my cover for Speedster as evidence.)

But now the fellow has seemingly fallen off the face of the earth. I have thus far sent him three Facebook direct messages, posted on his timeline once, and sent him an email. He left me a phone number, which I would gladly call, but it has too many digits and I don't know which one to leave out. He has failed to respond to any of my missives. I would just chalk this up to another flake in the crusty pie shell of my world, but I've already made his book cover. You can see it in first draft form at the top of this post. I think it's really pretty good. I think he'll think so too, but I don't have any idea what happened to him. Probably, in the interim, he thinks he got a better offer. I wonder if he's blond.
Posted by Jonah Gibson at 12:45 PM 1 comment:

Labels: blonds, book covers, getting stood up, stood up